Dungeons and Dragons cast its spell over a group of players at a school holiday programme activity. The attendees fought against monsters and cast magic spells in the world of Dungeons and Dragons last month. Anna Roguski taught five youngsters to play the game during the school holidays at the Stratford Library. Dungeons and Dragons is a fantasy role-playing game first published in 1974. Anna says she is wanting to start a Dungeons and Dragons Club in Stratford. “I moved back to Stratford from New Plymouth at the end of last year and I thought it would be great to start a club. I wanted to run a session during the school holidays to teach some people how to play the game and see if they’d be interested in joining a club if I started one.” She says the game teaches players how to work as a team. “It’s also great for social skills and the game itself is a lot of fun.” Duncan Roper, 16, says he enjoyed the game. “I had been interested in playing for a while and when this activity popped up I thought I would give it a go. I mentioned it to my friend Austin and he decided to come along and learn as well.” 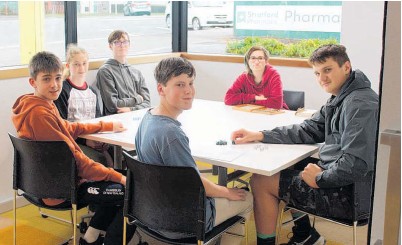