T he Central Bowling Club completed the fours championships over the weekend. Four teams qualified for post section play for the men’s event. Ian Mahoney defeated Ray Hudson’s team with Neil Bovey’s team defeating Gary Wylie’s four. The final was played in darkness near the end of the day, with all players wanting to complete the match. After 16 ends, Ian Mahoney’s team came out victorious 17-14. The winning team was Ian Mahoney (s), Stacey Thomas, Maurice Carter and Rob Anderson. In the ladies’ competition, three teams qualified, with Timeri Sanders team drawing the bye into the final. The semifinal between Babs Hirini and June Mears saw June’s team come out the victor. In the final, it was very even for the first few ends between the two teams, then Timeri’s team picked up several shots to take the championship by 17-7. The winning team was Timeri Sanders (s), Teo Thoresen, Marei Bevan and Diana McGill. The ladies finished in daylight. Both these teams will now contest the Champion of Champion event, to be held on May 15 and 16. This completes the championships for the season. 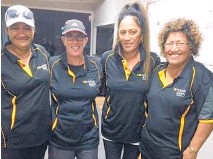 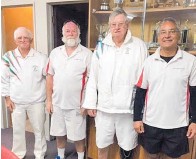