Delving into origins of Mother’s Day

American Anna Jarvis, who died in 1948 at the age of 84, was a social activist who founded Mother's Day Work Clubs and was the inspiration for the modern Mother's Day. The ancient people of Phrygia in Asia Minor may have been the first to celebrate and honour a mother. Wonderful stories were woven of gods and goddesses who moved the sun across the sky and twinkled the stars at night. Their most important goddess was Cybele, the daughter of Heaven and Earth, considered to be the mother of all the gods. A festival was held once a year in her honour. Likewise, the ancient Greeks had a powerful goddess, Rhea, believed to be mother to all gods and spring celebrations took place in her honour. In typical Roman grandeur, a temple was built on Palatine Hill in 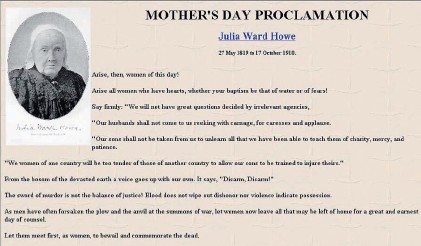